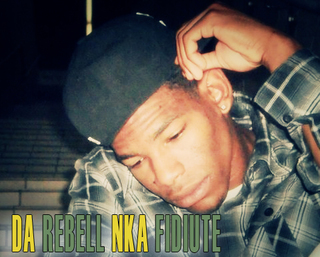 Born as, the third youngest son to the infamous David Obi better known as Bredda David, the creator of Kungo Music. Real name Mansa Obi music producer and song writer now internationally known as Da Rebell . The Belizean superstar was born in a small town in the beautiful country Belize inside the heart of the Caribbean and grew up in Southern California. While living in California, Da Rebell worked with Kenyatta Productions, a family based businesses that produce the Hit Hip-Hop Entertainment T.V. Show, NEW GENERATIONS. After being influenced by Hip-Hop artist and its culture it wasn't long before he caught the fever spread his wings and do his own thing. As a child Da Rebell was exposed to a wide variety of music from a tender age. "Music is in me since I was little, he says. The young musical prodigy watched carefully, collecting his lyrical ammunition. Da Rebell has made it his mission to conquer the Caribbean with his unique style. He has always approached his music from a different perspective, he know that as a young artiste he had to stand out from the crowd, so he chose to record songs with concepts attached to them while adding some swag of his own along with them. He quickly was signed to Commercials Unlimited, one of the top modeling and talent agencies in the business. After taking acting and dancing classes he began to go on auditions. Landing a few commercials and some guest T.V. spots, he knew entertainment was his calling and his journey began when he hooked up with some of his childhood friends and created the Drow-Boyz. Da Rebell propelled to the forefront as he proved over and over again that his talent was undeniable, it was clear – Da Rebell was on the road to being The Worlds next superstar. At the age of 14, Da Rebell returns to Belize to live with his father and attend high school. He practically lived in the studio down stairs in his fathers home, recording, producing tracks, writing and recording songs, honoring his vocal skill with older brothers, Ras Indio #1 Reggae Artist in the Country of Belize and Ras Nkrumah. After being featured on several songs with his brother Ras Indio, it didnt take long for him to combined his style with a mixture of hip-hop, reggae, dance hall, R& B and soul to then come up with his own sound. Da Rebells singing and dancing talents were amazingly mature and he soon became the dominant voice and focus of the Caribbean. Indeed, Da Rebell is one of the most talented artists emerging from the Caribbean. His sound is unique and original. He has been influenced by many artist from the likes of Bob Marley, Sizzla, Bennie Man, Tupac, Nas, Kurupt, Kartel and numerous reggae artists. Da Rebell is one of the all time favorite singer/performers. Da Rebell transforms his audience into a mass choir at his live performances. He epitomizes elegance and style and is always splendidly attired, giving fans the ultimate in appearance and presentation. His selection of songs range from commercial Hip-Hop, Rap, soulful R&B to hardcore Dancehall, Reggae, balanced with religiously calming cuts that enhance the spiritual vibes of his act. With his breathtaking harmonies and insightful lyrics, Da Rebell is not your usual Hip-Hop artist, and fans all over the world are starting to take notice. Entertainment writer, Howard Hendricks, describes Da Rebells voice as "a supernatural gift from a loving God that can out sing any Nightingale, and he possesses one of the sweetest male voices in popular music".