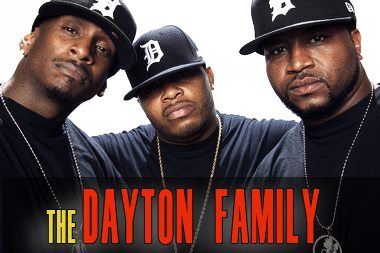 Flint, Michigan is located along the Flint River and 66 miles northwest of Detroit Murderous. Murders and homicides happen often in Flint and the city is somewhat of a warzone. Flint recently even had its own serial stabber that left five victims dead. In Flint you either learn how to survive real quick or you end up getting lost in the shuffel. People say, "Detroit hustles harder." If this is true you most say that, "Flint hustles hardest."

Just ask Flint natives the Dayton Family who have been making moves in the hip-hop industry since the early 90s. The Dayton Family, named after Dayton Ave, have always rapped when they knew about which was hustling and trying to survive in the trenches of the Flint ghetto. In 1991 the Dayton Family released a 5 song EP that made noise on the streets of Flint.

Around 1993 or 1994 the Dayton Family released , "What's On My Mind?" which got them attention from Atlantic Records. Unfortunately due to legal problems with the producer things never really took off with Atlantic Records. Also a member of the Dayton Family, Backstabber, was incarcerated after "What's On My Mind?" was released leaving other members, Shoestring and Bootleg, to carry on with the group. The group often recruited others to fill in for Backstabber such as Ghetto E.

The group bounced around within record labels releasing albums along the way but with Backstabber still incarcerated and Bootleg in and out of jail it was extremely difficult to form stability within the Dayton Family. Even with the groundwork of the group unleveled, the Dayton Family still managed to release albums and solo albums. However, in July 2010 patience paid off and the Dayton family were signed to Psychopathic sub label, Hatchet House, where they will be releasing a new album.