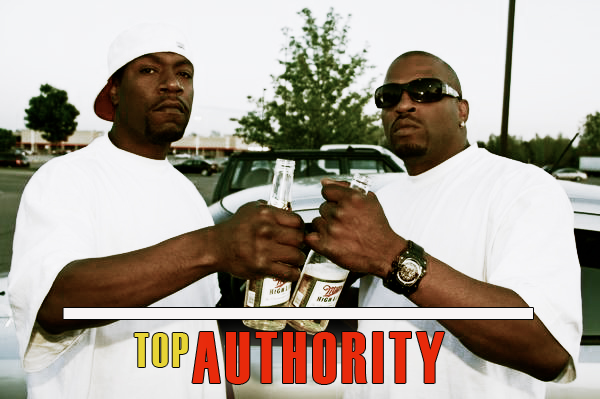 Top Authority was one of the first rap groups from Flint, Michigan and among the earliest of the underground Midwest rap scene to release a nationally recognized album. Bootleg, a member of the slightly later Flint group The Dayton Family, told Murderdog magazine, "We grew up together, same hood. We'd be together every day. That's family." He lists them as leading lights in Flint music, along with acts like Ready for the World and MC Breed. Rapper Chilla Pertilla defined Northern hip hop to Murderdog as "Eminem, Twista, Bone, Breed, Dayton Family, Top Authority, Esham, and ICP." They first came to public attention with the single "93 (Things Ain't How They Should Be)" from the debut album Something To Blaze To (TRAK Records, 1993). Something To Blaze To reached #21 on Billboard's Top R&B Albums chart in April 1994. The "rolling g-funk trio" (as allmusic describe members Shotgun, Dalo and Flex) followed up with Rated G for Wrap Records in 1995. It featured scratches from DJ Aladdin and reached #16 on the Top R&B Albums chart. all music considers 1997's Top Authority Uncut (The New Year) to be their best release. It peaked at #21, with the single "World War III" charting at #37 on Billboard's Hot Rap Singles. In 2009 Top Authority returned with their fourth album, kush music, on which MC Breed and Do or Die make guest appearances.